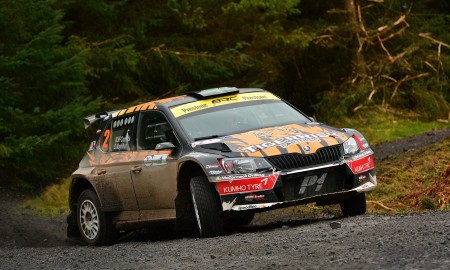 After two days of frantic action in the infamous Kielder Forest, Marty McCormack and David Moynihan got their British Rally Championship (BRC) bid off the ground with a superb third position on the Pirelli International Rally. On only their fourth event in the Tiger Risk Škoda Fabia R5, the crew set some very encouraging stage times, and were it not for a puncture on the fourth stage the result could have been even better!

Based in Carlisle and utilising some classic stages in ‘Killer Kielder’, the event was won by Swede Fredrik Ahlin in a Škoda Fabia R5, with Osian Pryce coming in second in a Ford Fiesta. Only 10.1 seconds separated second and third positions come the finish, and confidence is high in the Tiger Risk camp for the next BRC round, the RSAC Scottish Rally on the 19th and 20th May.

The pair held fifth overall come the Saturday evening halt, with Marty commenting, “We were delighted with our pace on the first few stages, and actually caught Eyvind Brynildsen on the first and got stuck in Keith Cronin’s dust on the second! The dust cost us a few seconds, but we were lying third until a rock caught our rear left Kumho on the fourth test and lost us a lot of time. We’re lucky to be here if I’m honest!”

David added, “It was a fifth-gear left over crest with a cut, but we didn’t quite keep in enough. A stall further compounded the time loss, but we’re still here and we’ll try again tomorrow.”

Try they did, and a time of 9:11.8 on the 16.85km of Sunday’s opening stage leapfrogged the crew back up to third position, where they stayed for the remainder of the event. Indeed, McCormack and Moynihan’s times on the final trio of stages were consistently in the top three, with a second-fastest time on the last Claver Hill test rounding off a terrific run. It was a case of what could have been, and after promising pace unfortunately ended in retirement on the opening BRC round at the Border Counties Rally, the team are hugely encouraged by the consistent speed shown over this weekend.

At the end of the tough event, Marty remarked, “It was fantastic to tackle the classic Kielder stages in the Tiger Risk Škoda Fabia R5, and we have shown that the speed is most certainly there. I’m delighted to get some points on the board, and the car and the Kumho tyres are working brilliantly. I’d like to thank David for a great job on the notes as ever, as well as the entire team for all their hard work. I can’t wait for the Scottish Rally in a few weeks’ time, and we’ll be gunning for a top result from the very start!”

Keep an eye on this site for further updates on Marty’s BRC bid, as well as on Twitter @martymccormack and on Facebook at www.facebook.com/marty.mccormack1. Marty is competing this season with the support of Tiger Risk Partners and P. McCormack and Sons Ltd.