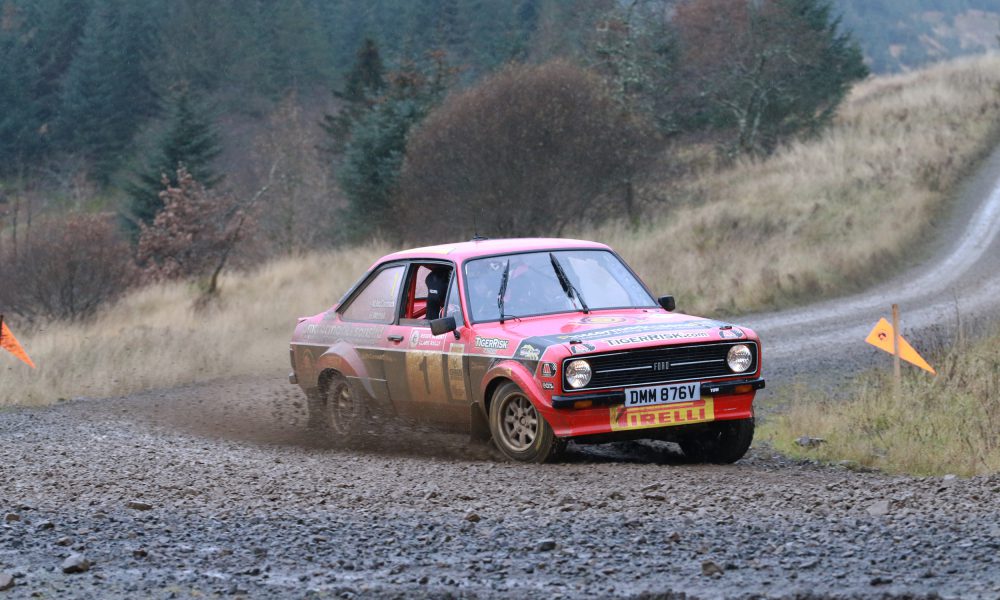 Marty McCormack stamped his name on the winner’s trophy of the gruelling Roger Albert Clark Rally for a third time, as he and co-driver Barney Mitchell stormed to victory at the unique five-day and three country event in their Ford Escort Mk2.

The Draperstown driver added to his 2012 and 2017 victories to emerge from the 300-mile extraordinary rally with a 52 second lead over his nearest rival, winning 17 out of the 32 stages in the process. The Tiger Risk Partners-backed ace returned a faultless performance to become the only driver in history to win the event three times.

After beginning the season in four-wheel-drive machinery and even winning the Cork 20 International in a Volkswagen Polo R5, by the mid-point of the year McCormack had turned his attentions to his RAC Rally preparations and would wheel out the Historic specification Escort on various national events in a bid to become “match fit” for the daunting bi-annual event.

As the longest stage rally in the UK, gruelling days with little rest would be the flavour of the week which took over 125 crews through the forests of Wales, England and Scotland. With typical British weather to add to the challenges, it would be the toughest rally of the year by far.

Friday’s leg would be held over classic Welsh stages and with several miles of asphalt thrown in, it would take a McCormack masterclass to keep the powerful Escort on the slippery military ranges. Eight stages were on offer in total, and he won five of them to put the car onto the trailer to head up to Carlisle that evening with a valuable thirteen-second lead.

The event would kick off on Thursday with two stages under the cover of darkness in the daunting Radnor forest, but thick fog played its part from the outset, causing the cancellation of the second pass. McCormack opened his account with the second-fastest time on the first, despite visibility being down to around five metres in places.

Day three saw the longest of the event with over 100 stage miles packed into Saturday’s Kielder Forest leg with many stages taking place in darkness. Despite his gap to the second-placed Jason Pritchard, McCormack would need to work hard to maintain his advantage during the day.

Famed for its cavernous ditches and unsighted crests, McCormack and Mitchell once again gained ground during the long daytime tests. However, as darkness fell, the fog returned and over 30 seconds were lost in the Harwood stage. Such was their lead, they returned to the overnight halt in Carlisle with an impressive 33-second lead.

The Scottish tests followed on Sunday and McCormack was back on form, edging out a bigger gap to the chasing pack throughout the morning loop. A puncture for Pritchard opened that advantage to over 1minute 30 seconds but such was the pace of his rivals, he could not afford to back off.

A precautionary steering rack change at the midpoint of the day failed to unsettle the Escort pilot, and he would head into the final day of the rally with a one minute and 49-second lead.

The final day would house its own sting in the tail with a 17-mile test providing the climax of the rally, offering plenty of opportunities to catch out the unwary over the five tests remaining.

McCormack would need to find a “comfortable” pace over the closing stages of the rally, one which would be enough to fend off his rivals and ensure a clean run over the tricky Kielder stages.

Despite the understandable nerves, McCormack emerged from the final stage of the rally to an emotional reception from his family and the team, to win the coveted RAC Rally for the third time in his career.

“This is absolutely fantastic”  he enthused.

“It’s been a superb race this week with Jason [Pritchard] and it’s been one of the toughest rallies I`ve ever done. There has been absolutely no room for error at all and we have been pretty much flat out for five days solid. It means so much to have won the rally for a third time as well, it’s getting harder each year we do it”.

The Escort driver was quick to praise the team around him too.

“Barney [Mitchell] has been fantastic on the notes all week, especially in the fog and it is really nice to be able to give him his second win on the event as well. The entire team have worked so hard all week long and the rally is just as tough for them, but I simply could not have done this without them. It’s been a true team effort and a huge thanks to all the fans and supporters out there cheering us on in the stages. There really isn’t another rally like it”.